The heart shape is usually used as a symbol of love. In fact, this symbol is extensively applied to various wedding card designs. In this design, we attempt to tweak this heart shape idea and create a new invitation design out of it. 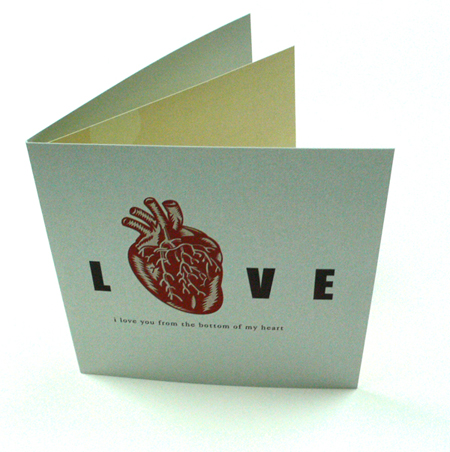 Origin Of The Heart Symbol

First of all, we can talk a little bit about the origin of the heart shape. It is believed that the shape originated from ivy leaves. It can be dated back to 300 B.C. It was usually used to decorate ceramics and clay vessels. As a matter of fact, the symbol was also used in medical illustrations in the past.

From some paintings in 12th to 13th centuries, ivy leaves were seen as an element to construct a love scene. The idea of using heart shape to signify love is probably coming from this origin. You may also ask why the symbol is usually red in color. It is because this color signifies warm blood. It also bore the meaning of having good luck and health in the past. These two origins eventually combined and transform to the heart shape we use extensively nowadays.

Interestingly, Buddhism also developed a similar symbol in parallel with the western world. However, the meaning of it is a bit different. Instead of signifying the idea of love, it is used to

A Common Design That Can Be Usually Seen

Let us go into the idea of using the symbol to design a wedding invitation. First of all, let us talk about something we can usually see. It is really common for us to see the symbol to be used with the word “LOVE”. In this case, the “O” is replaced by the heart shape like this one:

Without any surprise, this graphic element will be applied directly on the invite and this will become the cover or the main design of the card. It is also very common for couples to put two heart shape symbols together to signify the idea of two hearts becoming one. As a matter of fact, such type of graphic elements will also be seen on other products such as Tees.

Tweaking The Original Idea And Create A New Design

Now, it comes to our design. In fact, we are trying to ask a very basic question when we make this new design. “What will happen if the symbol is substituted by a drawing of a REAL heart?” That is the question we are asking here. If two hearts can really become one, how they will be going together. In fact, the heart shape does not really exist in the biological world of human beings. The shape of the real thing is a lot different from the symbol. These are the basic premises of our design.

As discussed, it is very usual to replace the “O” with the symbol when creating the cover of the invitation. In this design, we also follow this “tradition”. However, The symbol is changed to an abstract illustration of a biological heart. The notion here is to break the tradition by following the tradition.

The Inside of The Invitation: Two Hearts Become One

The idea of “Two Hearts Becoming One” is an illustration in the inside of the card. When we talk about this short phrase, it is very natural for us to think of images like this:

Please click the above image to see it in the original size.

Again, we think about how the two heart can become one at this point. If they are really going together, it will be natural to connect the vessels together. This will make the two become one. In fact, we also attempt to illustrate another ancient idea here. Ancient Roman people believed that the “vena amoris” runs through the ring finger directly to the heart. So, the two hearts are connected through the hand of the bride and the groom. Graphically, this will create a big “V” shape. The word “LOVE” appears again here and instead of replacing the “O”, the “V” is replaced.