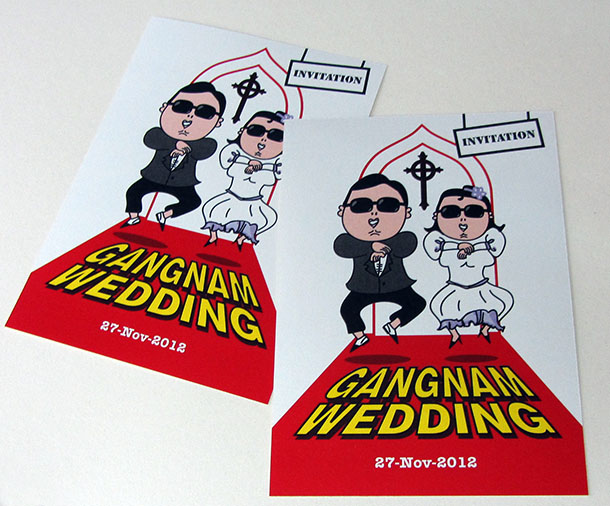 The “Gangnam Style” has certainly become a phenomenon on the planet. In fact, this is a song which is referred to the lifestyle of the Gangnam district, which is located in Seoul of Korean. People there are always hip and trendy. And this song has also created a trend!

Before we go into this fun wedding invitation design, let us talk a bit about the artist who sings the song Gangnam Style – PSY. Besides singing the song and performing in the music video, he also writes the lyrics of it. It is in fact quite rare for Korean singers to write the lyrics themselves. So, PSY is certainly a bit different from other K-pop artists.

I will say that the dance moves of the original video make it hit and famous. Some people will think that they are only some silly-looking dance moves. However, we have to admit that it is also something very cool. According to The Washington Post, it is really the moves that suddenly make it cool. There are commentators / reporters who also have a similar point of view. As a matter of fact, the click rate of the original video on youtube has exceeded 290,000,000 in two months time. It is “one of the greatest videos ever to be uploaded to YouTube” (Los Angeles Times).

In case you have not watched this wonderful video before. Here is the original version on youtube.

A Parody – A Wedding Video

There are a lot of parodies and videos related to Gangnam style. It is not difficult to find these parodies on the web. One of these parodies has especially drawn our attention. It is because this parody is related to weddings. A couple has used this song (and the dance moves) to create a wedding video. This video is an interesting one. Couples who are planning to create a video for there wedding party should take a look at it. 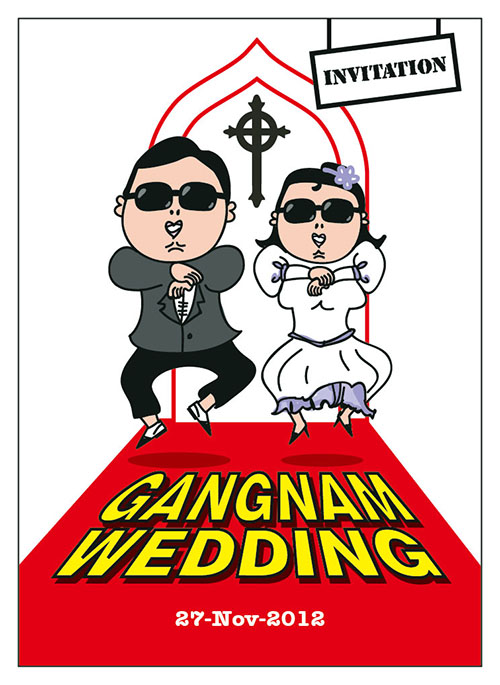 This fun wedding invitation design is inspired by an image from the original video of PSY. At the end of the video, there is a cartoon image. This image is also the cover design of the CD single by PSY. We have to admit that our design is a parody of this cartoon image.

We have drawn a couple when creating this wedding card. The bride and the groom, who are with their wedding dresses on, are dancing in the Gangnam Style. They are dancing on the aisle runner. Besides, the background of the cartoon drawing is a simplified church interior. We even put the word “Gangnam Wedding” on the aisle runner!

All the above design treatments are meant to reinforce the idea that it is about a wedding, with a sense of humor inspired by the Gangnam Style. The word “invitation” is put on the card in a way that it is a notice board hanged from the top of the “church”. In order to make the design fun, we have attempted to make this invitation very colorful. It is a really fun card. It is a parody at the end of the day. There is no point to make the design too serious. And we would like to make the design interesting. This will fit couples who are looking for some fun wedding invitations.